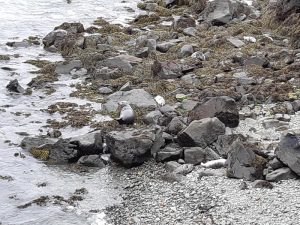 We’ve been visiting the beautiful County of Pembrokeshire for a long time now, as my husband’s parents live a few minutes from the coast near St David’s. While we are there we always visit our favourite places: Whitesand’s beach, Tregwynt Woollen Mill, the small secluded beach at Abermawr and Strumble Head Lighthouse, near the ferry port of Fishguard.

We particularly like visiting Strumble Head in the Autumn because there are often several seals with their pups below the lighthouse on the craggy rocks of the shoreline. In fact, it’s one of the best sites in Britain to view cetaceans. The West Wales coastline is home to 5,000 Atlantic grey seals and pups which are born from September to December each year. Secluded beaches, like at Strumble Head, are where they feel safe, and particularly where females with pups feel comfortable enough to leave their young while they go fishing.

Strumble Head lighthouse was constructed in 1908, automated in 1980 and is a Grade 2 listed building. It’s in the Pembrokeshire National Park and marks the southern limit of Cardigan Bay. It’s also been a site of Special Scientific Interest since 1954, to protect its fragile biological and geological elements. 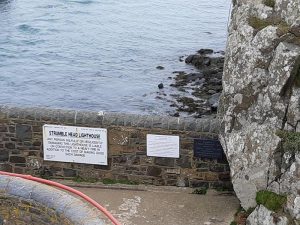 As usual we parked up on the cliff top just above the lighthouse and headed down the steep path towards it. Half way down we met a couple coming up and asked them if there were many seals, they replied that sadly no they didn’t see any, and anyway you couldn’t get down to the lighthouse because the gate was shut. They were noticeably disappointed as they carried on back up to the carpark. We thought this was very unusual because at this time of year there have always been at the least a few to see.

Imagine our surprise then when we opened the gate (it hadn’t been locked it was just a little stiff) and carefully descended to the bridge across to the lighthouse, peered over the wall and there were lots of seals! Not only that but on one of the big rocks, lying very majestically, was a very large male seal. We had never seen a male on land before they were always nearby in the water. He kept scanning all around him, checking on the females and the pups. We wondered if he was the father of the pups but had no way of telling. We do know that Atlantic Grey Seals are gregarious, social animals particularly in the breeding season. I was amazed later when I read up about the life of these beautiful animals – females can live up to 35 years and males up to 25 years. Living In such a harsh environment it makes the natural world seem even more amazing. 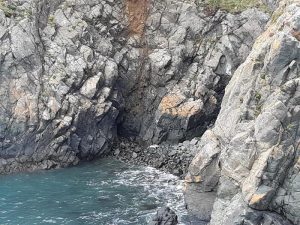 As we watched them a few of the pups started moving over the rocks to the drier part of the shore. They looked so helpless as they dragged themselves around, it was hard to imagine how graceful they become in their natural environment, the water.

We were so excited with this encounter that it took us some time to count them all, especially as a few kept popping up from behind the craggy rocks. We finally came to a total of fourteen which included the large male and several females and pups.

It really was a magical wildlife moment and we felt honoured to have witnessed such a wonderful and natural occurrence in a beautiful part of the World.