Since the publication of Harvey and the Moon Bus earlier this year I’ve had lots of people ask me how I came up with the initial idea and inspiration for the book, so I thought this would be a fitting way to start the blog on my new whizzy website!

There is a lot more to publishing a book than I initially anticipated and it’s nice to finally have the time to review the whole process. I will be doing this over several weeks. This post will start with the initial idea and inspiration for the book up to producing the first draft manuscript. I hope you enjoy reading it, and feel free to ask me any questions and leave comments.

The inspiration for Harvey and the Moon Bus came from our beautiful Norwegian Forest cat, Macavity. He was always getting into mischief and became a local celebrity in the neighbourhood. With so many of his cat antics to choose from it was only a matter of time before ‘Harvey’ materialised. 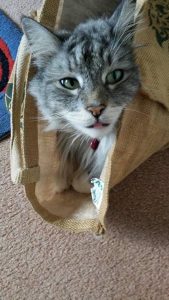 The story started one day when I walked up to the corner shop to buy a few groceries. As I was paying for them, the shop owner looked behind me and started clapping his hands. I turned around and there was Macavity sitting behind me! He must have followed me to the shop without me realising. I explained to the shop owner that he was our cat and he smiled and said he was often sitting outside on the pavement, “it’s as if he’s waiting for a bus” he said. And that simple sentence caught my imagination and set me on the path to writing my first children’s book.

As I was walking back home, with Macavity bouncing along behind me, I remember thinking if a cat was waiting for a bus where would it be going? It’s strange how the writer’s mind works! Then I thought that cats like cheese (well most cats) and everyone knows there is cheese on the Moon – so he could be going on a day trip to the Moon! When I got home I told my husband what had happened and when I mentioned the bus – he stopped me in my tracks and said “well the bus would have to be a 1950s one – it’s an iconic bus. Oh, and we could call it the ‘Moon Bus.” 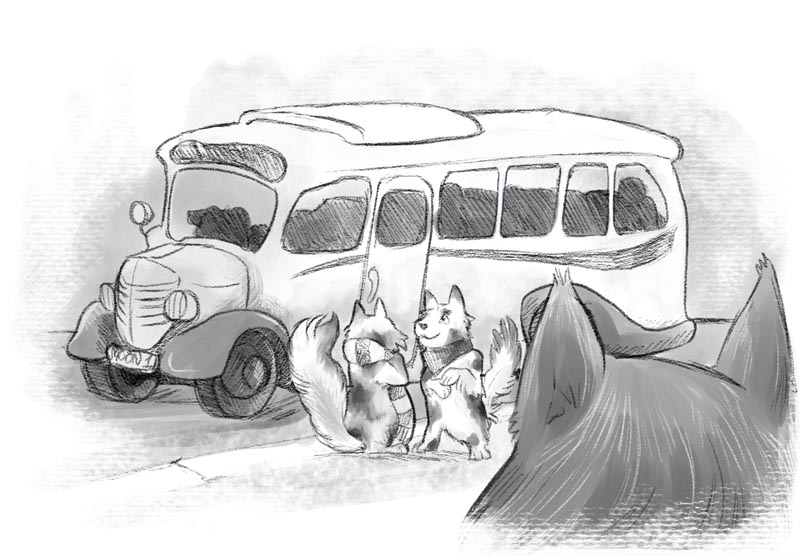 Over the next few days the story started to develop, and others animal characters appeared. I’d like to say we thought of the name ‘Harvey’ because it meant something or was significant in some way to us – but that’s simply not true. I remember tying to think of a name for a few days and for some reason the name just seemed to fit. So, Harvey was born.

There are nine animal characters in total in the story. A few of them – Gatsby the tortoise, Archie, the old farm dog and Moon Bus Driver, Gretel the tearful little mouse and Nelly, Macavity’s little sister Kissa are all based on family pets.

The nasty grey rabbit is the only character without a name. I never thought anything about this until a child at my first primary school reading asked the question “why was the grey rabbit the only character without one?” I was stumped. Quite simply I had no answer for him, although it made me think it was probably a subconscious thing – I hadn’t given him a name for the simple reason that he’s the baddy in the story and so didn’t deserve one! 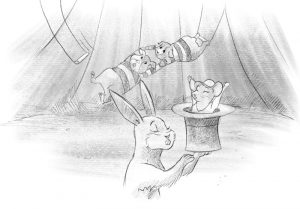 The final characters to be included in the story were the twin guinea pigs, Otis and Olive who do acrobatics at the circus and always dress the same. I remember thinking what sort of animal would be the least likely to do acrobatics and for some reason guinea pigs popped into my mind straight away. I’ve never had any and I didn’t know much about these cute little animals. I suspect the idea came from a work colleague who was talking about her pair one day in the office, they sounded such characters that I couldn’t resist having them in the story.

As I was getting towards the end of the book I realised that I needed a quick way for Harvey and Gretel to get back to the Moon Bus before it left for the day. I loved helter-skelters as a child – zooming down on a mat was so exciting. And then I had the idea about a magic mat that could fly anywhere on the Moon, and quickly. I remembered that in the Faraway Tree (which is one of my favourite childhood books) there was a slide from the top of the tree to the bottom that you whizzed down on with a cushion. It sounded such a fun idea and I imagined myself doing this. So, in the story Harvey and Gretel whizz down the helter-skelter on a magic mat to catch the Moon Bus before it leaves for the day. 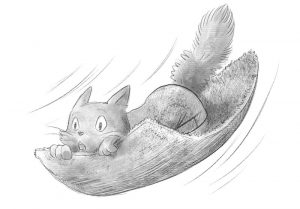 Eventually, over several weeks the story finally came together, and I had a first draft manuscript that I was pleased with. I left it for a few weeks and then decided it was time to get some feedback on it before going any further. Basically, I needed to know if children in the age group I had written it for (5-7 years) would like it. I decided to create a feedback form and send it out to several of my writing friends who had young children.

I waited patiently for a few weeks until everyone sent their feedback forms back to me and then read and digested the answers. I was really pleased with the results – which overall were very positive. It seemed like both the children and the parents liked the story. I was chuffed.