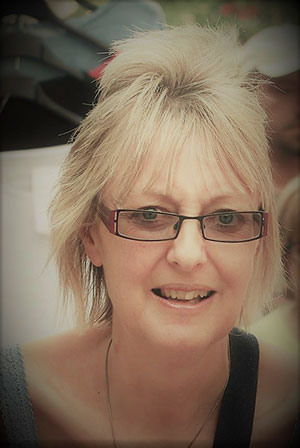 I grew up in a sleepy English village in the 1970s, at a time when flared jeans were the latest fashion, skateboarding was the latest craze, Police and Blondie were playing on the radio and strawberry Angel Delight was on the menu for tea.

I could often be found sitting in a quiet, shady part of our garden reading books, writing stories and poems, engrossed in my own fantasy world. I imagined when I was a ‘grown up’ I would be a spy or private investigator, travelling the world on exciting adventures! In my teenage years I had slightly more realistic ambitions and wanted to be a reporter for the local newspaper, but for various reasons, sadly, this didn’t happen, and I ended up with a more conventional career in commercial librarianship.

Finally, in 2010 I had the opportunity to work part-time so I enrolled on the Open University creative writing course and a few years later I was awarded the Diploma in Literature and Creative Writing. After that I had several pieces of writing published and then in May 2012 I had my first ‘proper’ article published in the Countryman magazine. It was about my grandparent’s award-winning dairy farm during the Second World War and I was ‘over the moon’.

I am now a full-time Freelance Writer and Children’s Author and work from home. Since that article in the Countryman I have won the Buckinghamshire Family History Society Alan Dell Memorial Award 2013 for an article about my Great Uncles in the First World War. I have won three writing competitions and have been a runner up in two, and have also had non-fiction articles, short stories and poems published in magazines, local newspapers and online.

Finally, in February 2018 I had my debut children’s book ‘Harvey and the Moon Bus’ (for ages 5-7 years) published.

It’s a beautifully-illustrated story about anthropomorphic animals who have a fantasy adventure together. The book has an underlying theme and moral message which is the importance of helping people and is the first in a series of planned ‘Harvey’ books. The inspiration for the book came from our beautiful and charismatic Norwegian Forest Cat, Macavity.

I am currently working on a number of writing projects including:

‘The Witness Tree’ – a book of interconnected short stories linked to conversations that have taken place under an old Oak tree on a village green.

‘The Faerie Cat’ – a heart-warming book about the antics of our mischievous and charismatic Norwegian Forest Cat, Macavity.

‘The Cul-de-sac Cats’ – a humorous book of stories (suitable for adults or children) about a group of neighbourhood cats.

‘The Upside-Down Tortoise’ a children’s picture book about a tortoise that gets lost but refuses the help of others to find his way home.